What You Should Know About Asthma in Dogs

Asthma is basically a term for difficulty breathing (called “dyspnea”). It usually includes wheezing and shortness of breath due to spasms and constriction of the large upper airways (the trachea and bronchi). Dogs, like people, can develop asthma, although in dogs the disorder typically is referred to as allergic bronchitis. In dogs, this condition is almost always caused by an allergic reaction to something in the environment, which in turn causes an inflammatory response in the upper airways. Most of the time, the allergen is something that the dog inhales. Long-standing allergic bronchitis can damage the tissues lining the respiratory tract, causing the more permanent changes associated with chronic bronchitis. The symptoms of so-called “asthma attacks” can vary widely from occasional breathing problems to severe dyspnea that approaches suffocation. By the time the condition is this severe, it usually has become chronic and irreversible. In very grave cases, the dog may resort to open-mouth breathing, and its gums and other mucous membranes may turn a purplish-blue from oxygen deprivation. When the consequences of asthma become this severe, the dog needs immediate emergency veterinary care to survive. 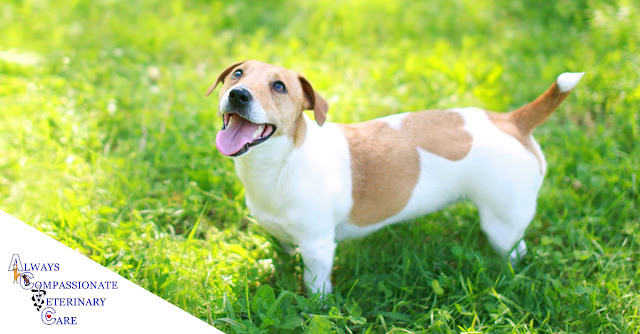 Asthma is much less common in dogs than in cats; feline asthma is a well-documented disorder. The observable signs of asthma in dogs can range from mild to severe. Often, the exact asthmatic trigger is never identified. Some dogs become lethargic, stop eating and lose weight due to the discomfort caused by the condition. By the time this happens, the condition usually has progressed to chronic bronchitis, which is progressive and irreversible. In very severe cases, a dog may resort to open-mouth breathing and its gums and other mucus membranes may turn a purplish-blue from oxygen deprivation. When the consequences of allergic bronchitis become this severe, the dog needs immediate emergency veterinary care. Fortunately, allergic bronchitis in dogs is uncommon and normally can be effectively treated with medication. If your dog show signs of difficulty breathing accompanied by a dry, raspy cough, take him to your veterinarian as soon as possible.

Chronic allergic bronchitis, or asthma, is most common in older, small breed dogs of either gender, although large breed dogs should not be overlooked. Dogs exposed to particular environmental allergens are at an increased risk of developing this disorder; those allergens include cigarette or cigar smoke, wood burning stoves, fireplaces, carpet or floor cleaners and deodorizers and air fresheners.

Although canine allergic bronchitis (also called asthma) is uncommon in dogs, when it does happen it can be quite distressing to owners and to the affected animal. Fortunately, a number of treatment options are available to help manage and minimize the consequences of this disorder. The goals of treating asthma are to identify and remove the inciting allergens from the dog’s environment if at all possible; they are usually something that the dog has inhaled. If that cannot be accomplished, a number of different medications are available to treat the condition symptomatically. Once the disorder becomes chronic, complete resolution of the cough is almost never possible. In those cases, the therapeutic goal becomes reduction of the frequency and severity of the cough so that the dog is more comfortable.

Once allergic bronchitis is suspected, the treating veterinarian will try to identify the underlying cause of the allergy attack so that it can be removed from the dog’s environment. Owners may be asked to keep an “allergy diary,” which records when a dog has an asthmatic attack, the severity of the attack, how long the attack lasted and what potential inhaled allergens the dog was exposed to at that time. The dog’s doctor may carefully question the owner about any possibly relevant changes in the household environment, such as use of new kitty litter, cigarette or fireplace smoke, carpet cleaners or other household items containing perfumes such as deodorant or hair spray, room fresheners, fertilizers, home remodeling products, painting, landscaping, pesticide use, new pets and similar items. Unfortunately, even a detailed owner diary and a thorough veterinary interview may not reveal the precise allergen(s) involved. If it does, the owner can take steps to remove those allergens from their dog’s immediate environment.

Dogs with asthma should be treated aggressively in order to minimize long-term airway inflammation and resulting chronic bronchial damage. The most common treatment protocol is administration of glucocorticoids and bronchodilators to help reduce the number and severity of allergic attacks. Metered-dose inhalers designed to fit a dog’s muzzle are increasingly available to administer bronchodilators and anti-inflammatory medication. In cases of secondary infection, antibiotics that penetrate airway secretions may be recommended as well; incorporation of antibiotic therapy should follow evaluation and culture of airway samples. Finally, cough suppressants are available for prolonged or exhausting non-productive coughs, although they are used cautiously because coughs are a useful and normal mechanism for clearing airway secretions.

The prognosis for dogs with allergic bronchitis is good to excellent with prompt diagnosis and treatment – especially if the inciting inhaled allergen can be identified and removed from the dog’s environment. Long-term treatment will be necessary in most other cases to control clinical signs and permit affected dogs to lead relatively normal, high-quality lives. If the condition becomes chronic, it will be progressive but rarely life-threatening and, with medical management and attentive owners, those dogs too should enjoy an excellent quality of life with a normal life expectancy.